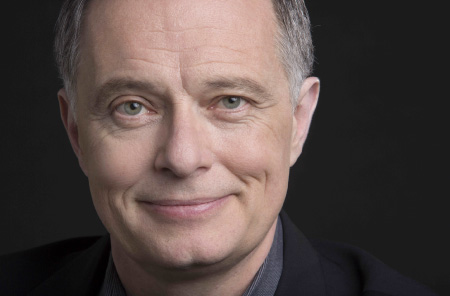 Kent is a member of the graduate faculty of The Juilliard School. Also an acclaimed organ virtuoso, Kent Tritle is the organist of the New York Philharmonic. 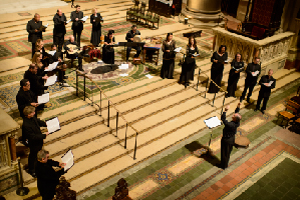 Among Kent’s recent notable performances: at the Cathedral of St. John the Divine, Verdi’s Requiem, Mahler’s “Symphony of a Thousand,” and Britten’s War Requiem performed by the Oratorio Society of New York and the Symphony and Symphonic Chorus of the Manhattan School of Music; and with the Cathedral Choir, the New York premiere performance by the Cathedral Choir of Einojuhani Rautaavara’s Vigilia (called by Opera News “a choral concert for the ages”). With Musica Sacra, world premieres of music by Juraj Filas, Michael Gilbertson, and Robert Paterson and an acclaimed performance of Rachmaninoff’s All-Night Vigil. And with the Oratorio Society of New York, the world premieres of the Paul Moravec/Mark Campbell oratorio Sanctuary Road (the recording of which received a Grammy nomination) and Juraj Filas’s Song of Solomon, and Mozart’s arrangement of Handel’s Messiah.

Kent has created high-profile collaborations for his groups with other major players in the New York music scene, directing the Manhattan School of Music Symphonic Chorus for performances of Beethoven’s Symphony No. 9 with the New York Philharmonic led by Alan Gilbert; Musica Sacra for the New York Philharmonic’s live score performances of 2001: A Space Odyssey, also led by Gilbert, and Close Encounters of the Third Kind; and the Oratorio Society of New York for Beethoven’s Missa Solemnis with the Orchestra of St. Luke’s led by Sir Roger Norrington, and Carnegie Hall’s 125th Anniversary Gala. He also led the “Mass Appeal Mass” of the “Make Music New York” festival for three years, including the 2012 premiere of a work by Philip Glass in Times Square. 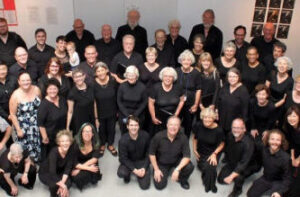 Kent Tritle is renowned as a master clinician, giving workshops on conducting and repertoire; he leads annual choral workshops at the Amherst Early Music Festival, and recent years have included workshops at Berkshire Choral International, [email protected] and at the Sibelius Academy in Helsinki. As Director of Choral Activities at the Manhattan School of Music, Kent established the school’s first doctoral program in choral conducting. A Juilliard School faculty member since 1996, he currently directs a graduate practicum on oratorio in collaboration with the school’s Vocal Arts Department.

In more than 150 concerts presented by the Sacred Music in a Sacred Space series from 1989 to 2011, Kent Tritle conducted the Choir and Orchestra of St. Ignatius Loyola in a broad repertoire of sacred works, from Renaissance masses and oratorio masterworks to premieres by notable living composers, earning praise for building the choir and the concert series into one of the highlights of the New York concert scene. From 1996 to 2004, Tritle was Music Director of the Emmy-nominated Dessoff Choirs. Kent hosted “The Choral Mix with Kent Tritle,” a weekly program devoted to the vibrant world of choral music, on New York’s WQXR from 2010 to 2014.

As an organ recitalist, Kent Tritle performs regularly in Europe and across the United States; recital venues have included the Leipzig Gewandhaus, the Zurich Tonhalle, the Church of St. Sulpice in Paris, Dresden’s Hofkirche, King’s College at Cambridge, Westminster Abbey, and St. Vitus Cathedral in Prague. With the Philharmonic he has performed Saint-Saëns’s Organ Symphony conducted by Lorin Maazel, Andrew Davis, Antonio Pappano, and David Robertson, and recorded Brahms’s Ein Deutsches Requiem, Britten’s War Requiem and Henze’s Symphony No. 9, all conducted by Kurt Masur, as well as the Grammy-nominated Sweeney Todd conducted by Andrew Litton. He is featured on the DVDs The Organistas and Creating the Stradivarius of Organs.

Kent is the 2020 recipient of Chorus America’s Michael Korn Founders Award for Development of the Professional Choral Art. Other recent honors include the 2017 Distinguished Achievement Award from Career Bridges and the 2016 President’s Medal for Distinguished Service from the Manhattan School of Music. Kent is on the advisory boards of the Choral Composer/Conductor Collective (C4) and the Clarion Music Society, and was the 2016 honoree at Clarion’s annual gala.

Kent Tritle holds graduate and undergraduate degrees from The Juilliard School in organ performance and choral conducting. He has been featured on ABC World News Tonight, National Public Radio, and Minnesota Public Radio, as well as in The New York Times and The Wall Street Journal. He was featured in Episode 6 of the first season of the WIRED video series “Masterminds,” an installment titled, “What Conductors Are Really Doing.”

Tomorrow, New Year's Eve, join in person or online for the "New Year's Eve Concert for Peace," 7 pm ET, at the Cathedral of St. John the Divine, NYC - Kent and Bryan Zaros leading a program of Gustav Holst’s "St. Paul’s Suite,"" David Lang’s "Make Peace," Joseph Turrin’s "Lullaby for Vaska," and Philip Herbert's "Elegy: in memoriam," hosted by Harry Smith. See the link below for info on tickets and to access the livestream:Ring in the new year with the Cathedral this Saturday! The New Year's Eve Concert for Peace will be available to livestream on December 31 for all our far-flung friends (and those nearer to home!) to join us and take part. No tickets are needed to livestream the performance! The concert will stream on the Cathedral's website, Facebook page, and YouTube channel starting at 7 pm on Saturday the 31st. In-person tickets are also available for this year's Concert for Peace! This beloved tradition, now in its third decade, has brought comfort and joy to New Yorkers since its founding at the Cathedral by Leonard Bernstein. Each in-person ticket purchase helps the Cathedral make the performance available for free via livestream and day-of distribution to our NYC community. Our deep thanks as well to the Mt. Sinai Health System for their generous support of the 2022 Concert for Peace!For more info, and to reserve in-person tickets, visit us online at stjohndivine.org. ... See MoreSee Less

Before conducting "Messiah" twice at Carnegie Hall next week, Kent is participating in five performances of the Handel favorite as organist of the New York Philharmonic. In this New York Times review of the NYP and Trinity Church Wall Street renditions, you can find Kent at the organ console in two of the photos!You can see Kent on the podium in person next week at Carnegie Hall - Monday with Oratorio Society of New York, Wednesday with Musica Sacra New York. Tickets for OSNY: osny.org/messiah/ Tickets for Musica Sacra: musicasacrany.com/handels-messiah-2022/ ... See MoreSee Less

Two performances, at Trinity Church Wall Street and the New York Philharmonic, were similar yet showed how beauty emerges in divergence.
View on Facebook
· Share